Before you go, check this out!

We have lots more on the site to show you. You've only seen one page. Check out this post which is one of the most popular of all time.

Did you know that some insects are so fast, they can zip around and become visible to the bare human eye?

So, which are the fastest, and how quickly can they fly?

It’s tricky to measure the speed of a flying insect, but it is possible, and it’s interesting to compare this with the speed that can be achieved by runners or other flying creatures such as birds.

We are going to look at:

How To Measure Speed

It can be quite tricky to measure the speed of flight as you need to take into account many factors. 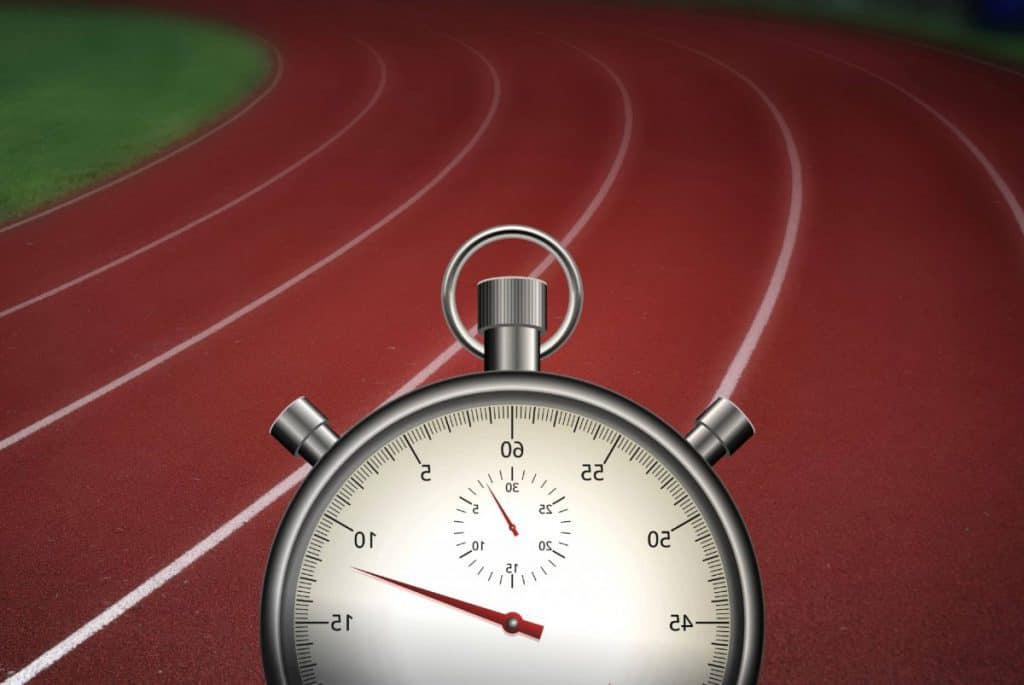 It might surprise you to learn that there has been little verified research done into the flight speed of various insects. This is perhaps because of the great number of factors that are involved, and how hard it is to reliably measure speed.

Many people have been wildly wrong in their estimations about what speed certain insects can reach.

It is therefore quite hard to know how quickly some insects can fly, and “very quickly” doesn’t really help much. However, we’ll cover the top known fast fliers, so you can assess them against each other and against others you may know of. But first, why is it important to be fast for a flying insect?

Why Do Insects Need To Be Able To Fly Quickly?

There are a few reasons why speedy flight might help an insect. Escaping from predatory birds is one of the most obvious; being able to dart and dive through the air fast makes them much harder to catch, as you probably already know if you have ever tried to catch a fly or moth.

Of course, fast flight also helps insects to catch food themselves, so predatory insects benefit from being able to fly fast. They will be more likely to catch prey, and may also out-compete other, slower insects when it comes to finding food.

Flight also makes it easier to find mates, and while this may not be so urgent as escaping from danger, quick flight could mean the difference between mating and not.

Now that, we know all the advantages of being fast, let’s not lose another second before discovering our top 10! 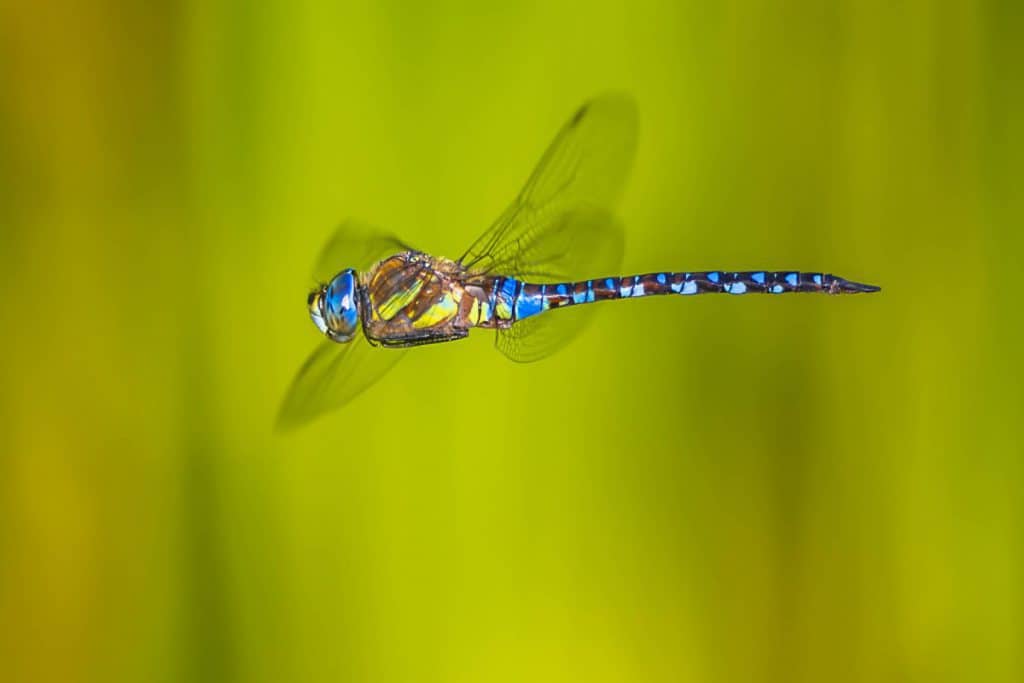 Although the fastest insect is under dispute, the dragonfly often ranks high on the list, and many sources consider it the fastest in the world.

It can reach speeds of around 97 km per hour, although it normally only flies at about 30 km per hour.

Dragonflies fly quickly both as a means of escaping from danger and of hunting, and it is thought that dragonflies are actually capable of calculating where their prey are going to be and intercepting them in mid-air.

This involves assessing the prey’s direction, speed of movement, and distance from the dragonfly, as well as the angle and speed at which the dragonfly must travel to grab the prey.

This is quite a sophisticated calculation, and it is impressive that dragonflies can do this in such a short space of time, making them fearsome hunters.

Also, one of the top contenders for fastest flying insect in the world, the horsefly is claimed by some sources to be able to reach speeds of 145 km per hour,

However, others rank them at only being able to reach around 60 km per hour – obviously a massive difference.

Nonetheless, it’s certain that horseflies are very quick insects, found across the globe, on every continent except for Antarctica.

You are likely to have come across them, with their aggressive and painful bite. They are an unpopular species, but there is no denying that they are fast!

You might be surprised to see the humble honey bee on this list, but in fact, honey bees are very quick fliers, as they need to be in order to gather pollen efficiently.

They are thought to be able to fly at around 65 km per hour, the sort of speed that you might travel at in a car quite often.

Of course, bees slow down considerably once they have started filling their little pollen sacks up, as the extra weight reduces their speed.

They will manage around 30 km per hour when their pollen receptacles are full, which is still an impressive speed!

An American Deer Bot fly can zip about at around 50 miles (ca. 80 km) an hour, which is impressive.

They are also extremely manoeuvrable and can dart about in the air with amazing speed and nimbleness.

Bad news for those who despise stinging insects, hornets can fly very quickly. This is partly what makes them such effective hunters, and they can often reach speeds of around 25 km per hour.

They are likely to be able to outstrip you if you try and run away from them, so avoid provoking them and reaching this point if possible!

Hornets hunt a variety of different insects, such as locusts, bees, and grasshoppers, so they need to be able to fly fast in order to successfully take down their prey. They are large and aggressive creatures, and their swarms should be avoided as much as possible to avoid getting stung.

Hornets also eat nectar, and will fly quickly from flower to flower in order to gather it before other insects find it.

They have powerful jaws for dismembering their prey, but they do mainly feed on nectar when they have the option, and only hunt other insects for a small proportion of their food.

The hawkmoth is the fastest of the moths, and can reach speeds of around 54 km per hour.

They are somewhat like hummingbirds in the way that they can hover above a flower, sipping the nectar with their long tongues while almost perfectly still. Indeed, there is a kind that is referred to as the hummingbird hawkmoths.

They are crucial pollinators for many kinds of plants, spreading the pollen from flower to flower, and their speed and control in the air is admirable and beautiful to watch.

Famed for their ability to deal devastation upon crops, locusts are not the fastest flying insects, but they are quick, and they are also one that has been measured more reliably than others in wind tunnels – probably because of their impact upon crops.

Locusts can fly at around 33 km per hour, which may not sound that fast, but it allows them to cover considerable distances in their search for food.

If locusts are swarming in the area, they can move from field to field very fast, making it harder to get on top of the infestation.

They certainly aren’t a rival for the dragonfly or horsefly, and they probably aren’t nearly as agile in the air, but they can still reach impressive speeds, moving swiftly in their hunt for a good meal.

If you’re wondering what the fastest butterfly is and how that compares to the others on the list, know that the butterflies are certainly holding their own.

The skipper butterfly can achieve speeds of around 37 miles (ca. 60 km) per hour, and while that isn’t outstripping the dragonfly either, it’s still an impressive number.

Skipper butterflies have very quick reactions, and this helps them stay out of the way of predators that might attack them.

It also helps them find food, although they won’t be able to maintain this speed for very long.

If you need an example of how quickly these butterflies can flit through the air, their speed could rival a horse.

They are thought to have some of the fastest reactions in the world, which is a definite asset when it comes to avoiding predators.

Among the most popular insects out there, ladybugs are often thought of as slow and somewhat bumbling. They don’t seem to have the lightness of a butterfly, or the aerodynamics of a dragonfly. However, they are also capable of superb speed when in flight.

Ladybugs are thought to be able to fly at around 37 miles (ca. 60 km) per hour, rivalling the skipper butterfly.

They are also literally high-fliers, sometimes reaching around 3600 feet into the air.

They are fierce hunters and if you have problems with pest species such as greenfly in your garden, they are one of your best friends.

You can even purchase ladybugs to release in your garden because they are such an effective pest control method, although with that flight ability, there’s no guarantee they’ll stick around to keep your garden bug free.

A ladybug’s wings are folded beneath a protective casing most of the time, and this has to be lifted out of the way in order for them to fly.

While the resulting shape may not be the most aerodynamic to be found in the insect world, it is clearly effective enough for ladybugs to be very quick fliers!

Another surprising contender on the list, bumblebees aren’t the quickest, but they can reach speeds of around 28 km per hour when they are on the lookout for food.

Again, in spite of not having aerodynamics on their side – and indeed, looking like they are not designed to fly at all – they manage to do surprisingly well in the air.

Bumblebees are slowed down considerably when they are carrying pollen back to their home, and will often only fly at around 17 km per hour when laden down with something. However, they are still speedy.

A bumblebee that is not laden down could traverse the length of a football field in about half a minute. Their wings can make around two hundred movements in a single second, allowing them to move extremely quickly.

This is because the wings don’t flap, but instead vibrate, generating immense energy and powering the bee through the air at speed.

Flying insects can reach extraordinary speeds and there is a great deal of variation between them.

Some of those that look like they aren’t built for speed at all are surprisingly quick in the air, and others – like the dragonfly – seem as though they evolved to zip around so fast that we can’t keep up!

Alright, that’s it for this article, here are a few hand-selected articles that you might also find interesting reads:

The Color of Dragonflies

Mad about bugs and wanting to publish as many articles as I can to help educate people about these amazing beautiful creatures! For more info check out my about page https://schoolofbugs.com/about-steve-foster/

link to How to Get Rid of Silverfish - 5 Minute Guide

Although they don’t carry diseases and are harmless enough to humans, silverfish can still present a serious problem if they invade your property. Silverfish can multiply quickly and, in numbers,...

The issue of pests has plagued humans for centuries. Two of the most common pests that make their way into people’s homes are cockroaches and silverfish. This article is the definitive guide on...

Hi, my name is Steve

I've been passionate about the natural world ever since I was a kid.

School Of Bugs is my way to help educate people on the weird and wonderful world of bugs.
Enjoy the website!